AC repair service in Palm City – Should I repair or replace my air conditioner?

Is your air conditioning not cooling as well as before? Is it consuming too much energy? Solve these and more issues with an AC repair service in Palm City to get your cooling system back to work efficiently.

But with all the advancements in the AC field in the last decades, you may wonder if it’s worth it repairing your system or if you’re better off replacing it with a newer one. And you may have some basis for it.

When considering whether to repair or replace your AC, remember that since 2006, SEER (Seasonal Energy Efficiency Ratio) rates have been risen to a minimum of 13 and since 2010 the refrigerant of older systems was discontinued. These changes have made modern systems, even at the lowest standards, much more energy efficient than older ones, bringing into question whether it’s worth keeping systems older than 2006 or even 2010.

Nonetheless, the machinery is not the only component of an AC system. You need to think about ductwork and insulation as well, as they may be the cause of the problem and the solution could be repairing them, not replacing the AC. Consider the following before making your choice:

• Inspect the ductwork, as you could be losing between 10 and 30% of the air before it reaches livable space. Even if you replace your AC, if you have faulty ductwork your space will take longer to cool down. Conversely, repairing or replacing faulty ductwork can boost up your efficiency so that you won’t need AC replacement in a few years.

• Check the insulation. Just as with the ductwork, a poorly insulated home will make your system less efficient. Fixing your insulation could boost up your system’s efficiency, lowering your costs as much as 30% and foregoing the need of a replacement. Don’t replace your AC until you see that it is inefficient even after reinforcing your insulation.

•Consider SEER ratings and refrigerant. Since older systems have lower ratings and use a different refrigerant, they are less energy efficient, which translates into more money. If your system has 10 or less SEER and/or R-22 refrigerant and ductwork or insulation are not an issue, a new system can cut your costs down. If your system is more recent than 2010, it probably needs a few repairs and a replacement is not necessary.

If all these variables seem like too much for you, don’t despair! An air conditioning contractor, such as A/C Now, can help you weigh everything in and determine whether you should repair or replace.

A/C Now is an expert AC repair service in Palm City. We are locally owned, based out of Port Saint Lucie. Our goal is to serve our neighbors in the Treasure Coast with impeccable service and admirable quality.

Don’t leave an AC repair service in Palm City for later when you could have it now by calling the experts at A/C Now! 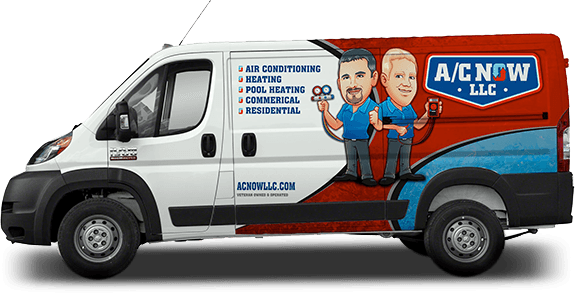 READY TO GET STARTED?